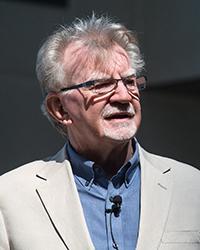 Richard Barrett is an author, speaker and internationally recognised thought leader on the evolution of human values in business and society. He is the founder and chairman of the Barrett Values Centre, a Fellow of the World Business Academy and Former Values Coordinator at the World Bank.

Richard Barrett is the author of A New Psychology of Human Well-Being: An Exploration of the influence of Ego-Soul Dynamics on Mental and Physical Health (2016), The Metrics of Human Consciousness (2015), Evolutionary Coaching: A Values-based Approach to Unleashing Human Potential (2014), The Values-Driven Organisation: Unleashing Human Potential for Performance and Profit (2013), What My Soul Told Me: A Practical Guide to Soul Activation (2012), Love, Fear and the Destiny of Nations: The Impact of the Evolution of Human Consciousness on World Affairs (2011), The New Leadership Paradigm (2010), Building a Values-Driven Organization: A Whole System Approach to Cultural Transformation (2006), Liberating the Corporate Soul: Building a Visionary Organization (1998), and he is a contributing author to Psychometrics in Coaching (2012).