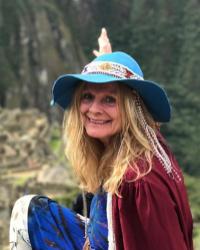 Linda Star Wolf has been a visionary teacher and shamanic guide to thousands of people over the last 35 years. Star Wolf is the Founder and Co-Director of Venus Rising Association for Transformation, a 501c3 non-profit organization, and the Founder and President of Venus Rising University for Shamanic Psychospiritual Studies, established in August of 2010 in the state of North Carolina. The author of several books and the creator of the Shamanic Breathwork Process, much of Star Wolfs work is revelatory and comes from her own direct experience. With over 30 years of recovery from her own experience with addictions, Star Wolf has dedicated her life to helping others to release dysfunctional patterns of all kinds and to radically transform their lives. She teaches people how to awaken to the bigger picture, embody their own inner Visionary Shaman and step into a life of passionate purpose. Star Wolf's strong personal commitment to sacred activism and visionary leadership led her to create the Shamanic Ministers Global Network, a worldwide association of Shamanic Ministers and Congregations dedicated to helping those they serve to awaken to their own sacred purpose. Star Wolf also co-founded the annual Wise Wolf Councils, a four day gathering of spiritual leaders and lay people from around the world who come together to share their wisdom teachings and to vision for our planet. In 2003, Star Wolf and her late husband, Brad Collins, Co-Founded the Isis Cove Community and Retreat Center in the beautiful Blue Mountains of western North Carolina where they resided in community with 20 other shamanic practitioners who have also made Isis Cove their home, along with several dogs, cats, chickens, peacocks, goats, birds and critters of all kinds.

Starting out as a therapist in the mental health and addictions fields in the 1980's, Star Wolf is a nationally certified alcohol and drug counselor. She holds a BA in Human Services from St. Leo College and a Doctorate of Ministry and Ph. D. in Spiritual Psychology from the University of Integrative Learning where she first conceived the idea of someday creating a shamanic psychospiritual university. Star Wolf was originally introduced to Holotropic breathwork by its founder, Stan Grof, and trained extensively with Jacquelyn Small, founder of Integrative Breathwork, becoming one of the lead trainers at Small's Eupsychia Institute. Star Wolf also studied shamanic earth wisdom teachings with the late Grandmother Twylah Nitsch, a Seneca Wolf Clan elder and founder of the Seneca Indian Historical Society. Grandmother Twylah adopted Star Wolf as a Spiritual Granddaughter and gave her the spirit name of Star Wolf.