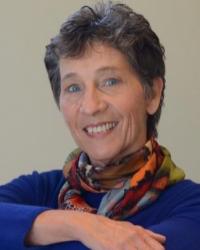 Jan Phillips’ quest has taken her into and out of a religious convent, across the country on

a Honda motorcycle, and around the world on a one-woman peace pilgrimage. Born gay, she

became a social activist in response to the homophobia she felt even as a young girl. She

entered the convent at age 18 because it was her 6th grade nun who saved her from suicide.

between spiritual intelligence, evolutionary creativity, and social transformation. She has taught in

over 25 countries, and has published work in the New York Times, Ms., Newsday, People, Parade

She has performed with Pete Seeger, presented with Jane Goodall, sung to Gladys Knight,

and worked for Mother Teresa. Her books have been endorsed by Bishop John Shelby Spong, Ervin

Jan teaches throughout the United States and Canada, facilitating retreats on

evolutionary faith and prophetic action. She has produced three CDs of original music, has a