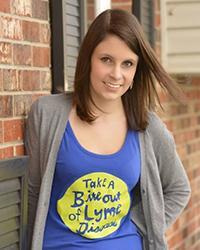 As a young child, Alicia was very active and loved to spend time outside playing sports and going camping with friends. At ten years old, she attended a summer camp in the Adirondack Mountains where she became very ill with flu like symptoms that mysteriously resolved within a few weeks. Over the following years, Alicia began to present with a number of unexplained symptoms that included chronic fatigue, anxiety, neuropathy, muscle weakness and Postural Orthostatic Tachycardic Syndrome.

Alicia preserved through college despite her mysterious symptoms and was accepted into the Physician Assistant masters degree program. Unfortunately, during her senior year of college, Alicia’s health began to significantly decline, forcing her to move back home with her parents where she remained bedridden for the next year. After seeing more than 30 doctors at 8 major hospitals, suffering from vision and hearing loss, and extreme memory loss, Alicia was finally diagnosed with Lyme Disease.

Alicia is now 8 months into treatment with her doctor for Lyme Disease and several co-infections and has since retuned to school to complete her bachelor’s degree. She remains an active advocate in the Lyme Disease community, and continues to share her story to raise awareness of this tragic disease.