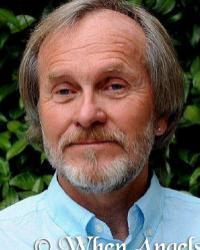 Tom Lumbrazo was raised in central NY and came with his parents to California in 1965. He went to college at Sacramento State for a degree in Government , and then went on to Fresno State for a Masters degree in Urban and Regional Planning.

He began his professional career as a City Planner in 1971 with the City of Davis, Ca. and worked his way to Planning Director of the City. He left in 1989 and started his own company called “Tom Lumbrazo Planning Inc.” which assisted governments, lawyers, and builders through the government entitlement process.

Then in 2001, his life changed dramatically. While he did not believe in Angels at the time, an Angel came into his Jeep while driving home on a Friday afternoon and shouted at him to “Slow to 35”. It was so powerful, he did just that and within seconds, a car pulled in front of him, causing a terrible car crash. The Angel voice saved his life. Tom could have ignored this directive and he would likely not be alive today.

That started a whole new life. But Tom insisted that he find out who this Angel was and why he talked to him and save his life. It took years to find out but in 2005, he had his first vision of hundreds to come. That vision was of that Angel…Archangel Michael. Then in 2008, that Angel came to him and his wife Caroline in the form of a cloud over Sedona AZ. which he was able to photograph.

Tom in 2007 became infatuated with clouds and their images when he went to Peru. In 2007, he became an artist not because he wanted to, but because he was directed to do that. In 2009, he was pushed by the Angels to write his first book “Journey to the Clouds,” and then in 2010, another book called “Faces of the Universe.”

During this time from 2004 to 2010, Tom faced many obstacles along the “spiritual transformation” he was being led. Ancestral Spirits, Demons, and even the dreaded Djinn attached to his body causing pain, frustration, and even depression. Still today, such entities try to influence him or stop his work to spread his information about Angels, Love, and Peace.

From 2008 to the present time, Tom would receive messages in the form of visions, whispers in his ear, or directions to do something. These messages were from the Angels and Guides around him as well as other dimensional beings. This guidance started a process of trips around the world to Egypt, Australia, England, Ireland, France, Italy, etc. These travels were to spread our energies throughout the world, to follow the Archangel Michael ley lines, and to recapture the remnants of the Soul of our past lives…Soul Reintegration.

In 2013, Tom completed his third book, “Simply Angelic” and in 2017, he completed his last book “The Magic of Finding Love and Peace”.

Join Tom the first Friday for the next four months at noon Pacific Time on the Kornelia Stephanie show. Over the next months, Tom will share his intimate experiences and wisdom gained through the last 17 years of spiritual transformation. Tom is living today because Archangel Michael came into his Jeep just before a terrible accident and guided him to safety. Since that time, Tom’s life has dramatically changed as he has experienced Archangels, Angels, Angels in Human Form, Aliens and Dimensional Beings, Messages from our Clouds, Karma, Reincarnation, Soul Retrieval and Integration and much more. Even frequent conversations with his Dad who died in 2011, Tom has documented these experiences and is sharing them with you in his new book “The Magic of Finding Love and Peace”.