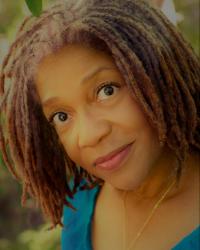 RayNelle Williams first discovered Numerology as a teenager and soon began using it to guide life choices for herself, family and friends.  Years later she began serious study of Numerology and soon discovered that she no longer needed to “look” at the numbers in a chart. Eventually the numbers became symbols of energy that told the life story of the person in session. The life story includes things like natural talents, strengths and abilities, challenges or patterns and how to overcome them, tendencies in relationships and so much more.

Previously, RayNelle spent 23 years in corporate where she served in roles such as  Deputy Insurance Commissioner and Senior Consultant. In 2010 she resigned from an advancing career to live her passion as a Numerologist and thought leader for the advancement of sovereign women.

Today RayNelle is Numerologist and Women’s Visibility and Sovereignty Mentor.  She is founder of “Be Who You Are Woman,” and leads Sovereignty workshops and retreats.  She also conducts private Numerology and Mentoring sessions by phone and skype.  RayNelle has been named one the country's top psychics in the book, "Top 50 Psychics" by Jennifur Diamond.

Her message is simple “Be Who You Are Woman ~ a Sovereign Being!”