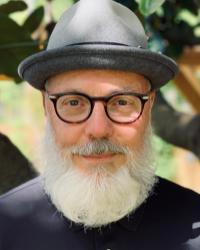 RABBI RAMI SHAPIRO, Ph.D., has a reputation for being perhaps the most unorthodox rabbi you've ever met! Growing up, his mother thought he might be the Messiah, while his father was convinced he was a luftmensch (air head). Air head, indeed! He earned rabbinical ordination from Hebrew Union College in order to preach his ideas in synagogues, and a PhD in contemporary Judaism from Union Graduate School in order to teach his ideas in universities.

Along the way, he’s taken Bodhisattva vows in Zen Buddhism, become a 32° Mason in the Scottish Rite, been initiated into the Ramakrishna Order of Vedanta Hinduism, joined the Theosophical Society, published three dozen books, has had his poems included in prayer books and hymnals around the English speaking world, and has walked the 12 Steps of Overeaters Anonymous more times than he can count.

His award-winning bestselling books fall into three categories: Biblical translations that make the Bible say what he wishes it would say; spiritual explorations that make spirituality all about practice rather than feelings; and recovery that reveals the central addiction of all humans—playing God—and the way to free oneself from it: realize God is playing you. Well known for his quality scholarship and sacred spirit, he served for 20 years as the founder of Miami’s Temple Beth Or, where he experimented with new forms of Jewish liturgy and practice, combining his experiences with Judaism, Buddhism, and Hinduism.