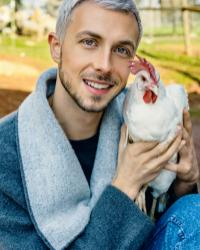 Nathan Runkle is the founder and president of Mercy For Animals. Raised on a farm in rural Ohio, Nathan has long had a deep connection with farmed animals. After a local farmed animal abuse case involving a piglet slammed headfirst into a concrete floor during an agricultural project at a nearby high school, Nathan founded MFA to give "food" animals a much-needed advocate in his local community.
Since founding MFA over a decade ago, Nathan has overseen the organization's growth into a leading international force in the prevention of cruelty to farmed animals and promotion of compassionate food choices and policies.
A nationally recognized speaker on animal advocacy, factory farming, and veganism, Nathan has presented at colleges, conferences, and many other forums from coast to coast.
Through his work with MFA, Nathan has been an outspoken advocate for animal rights, featured in hundreds of television, radio, and newspaper interviews, including on ABC's World News Tonight, Nightline, and 20/20, CNN, and National Public Radio, and in USA Today, The New York Times, the Los Angeles Times, and the Chicago Tribune.
Nathan works closely with MFA's diverse group of members, supporters, and employees to develop and fulfill objectives within the organization's four areas of focus: education, legal advocacy, corporate outreach, and undercover investigations.
Nathan has worked alongside elected officials, corporate executives, heads of international organizations, academics, farmers, celebrities, and film producers to pass landmark farmed animal protection legislation, raise public awareness about vegetarianism, and implement animal welfare policy changes.
VegNews magazine has recognized both MFA and Nathan for making substantial contributions to the vegetarian movement, naming Nathan one of the "25 Most Fascinating Vegetarians" and one of the country's "Top 20 Activists Under 30 Years Old," and twice naming MFA "Non-Profit of the Year." In 2009, at the age of 25, Nathan became the youngest person ever inducted into the US Animal Rights Hall of Fame.