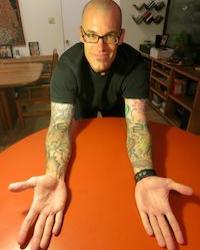 From an early age, Mitch’s curiosity of the unknown universe forged his path in storytelling and research. Mitch works as a transmedia producer, experience designer, and educator exploring the inherent connections among consciousness, nature, culture, and the evolving human mythology.

In the early ‘90s the confluence of art, information, and technology became the perfect storm for the germination of ideas that continue to inspire him today. Schultz’s academic research at UT Austin and New York University focused on communication theory, information technology, and media production. Mitch mentored with visionary producer Tommy Pallotta while in school, and opened Spectral Alchemy as an interface for his creative work in indie/studio development, broadcast, interactive design, and commercial production.

In 2009 Mitch shifted his focus to his personal creative vision. As a result, DMT: The Spirit Molecule, premiered two years later and became an instant cult classic. The DMTRMX project, an open source media library and emergent storyworld, became the inspiration for MYTHAPHI. His ongoing curiosity of the future and academic musings on cultural evolution continue to evolve his art and research.