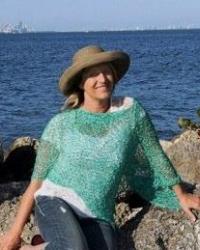 Linda Schaefer is a photographer by trade, but an artist by intuition. Recognized by respected magazines and newspapers, her work has appeared in the New York Times, Catholic Digest, Time and Newsweek, the Atlanta Journal-Constitution, Parade Magazine, Paris Match, GQ, the Los Angeles Times, and Stern to name a few.

She began her career as a journalist for CNN in 1985, but found she couldn’t loose her first love – still photography. While a freelancer for the Associated Press she decided this would be her full- time occupation. Her passion for documentary work, along with the fact that she had lived in Brazil during her childhood, led her explore and photograph the Amazon. After traveling to Brazil, and hitchhiking with another female journalist on the back of sugarcane trucks, she found herself in the southeastern basin of the Amazon. While staying at a Catholic mission, she documented the indigenous tribe known as the Xevante.

Back in Atlanta, Linda received grants that allowed her to document “The Face of America” during the presidential campaign of 1988. Her work was exhibited at both the Democrat and Republican conventions that year and CNN featured her documentary.

She traveled to India with her first husband and, following his death 1992, Linda experienced a flowering of her spiritual life. In 1993 Linda traveled with a Christian medical relief team to Romania. After photographing events in the wake of the end of the Communist dictatorship of Nicolae Ceausescu, she turned her attention on Croatia and war-torn Bosnia. Back in the United States in June of 1995, Linda had her first contact with Mother Teresa, who was visiting Atlanta.

Traveling to Calcutta several months after meeting Mother Teresa, Linda had the rare opportunity to document the work of the Missionaries of Charity. Thousands of photographs later, select images of that experience were selected for inclusion in this book.

Linda Schaefer resides in Ada, Oklahoma with her son Paul. She is on the faculty of East Central University in the Mass Communication Department. As Mother Teresa often commented, “Each person can make a difference.” That is what Linda seeks to accomplish through her work.