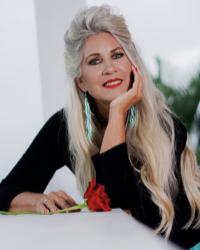 Kristy Corwin is the creator and executive producer of the upcoming documentary about the fascinating untold Hollywood story of legendary musician Russell Garcia. Garcia was the most sought after Hollywood music director, composer, and producer of his time, working alongside celebrities like Ella Fitzgerald, Louie Armstrong, and Charlie Chaplain. The story is particularly captivating because Garcia often worked as a "ghost composer" who rarely took credit for the projects. Kristy currently serves as President and Executive Director of “Build A Better World Foundation” & CEO of “Build A Better World Productions”. Both organizations were founded and created to carry forward the Legacy of Music, the Empowerment of Youth & Humanitarian efforts that her grandparents, Russell & Gina Garcia, dedicated their lives to all over the world for 60 years. She is also the producer of the musical, The Unquenchable Flame. Kristy joins us from her home just outside of Los Angeles in California… and today she will share details about an upcoming tribute concert she is planning at the world famous Hollywood Bowl! Welcome Kristy Corwin!