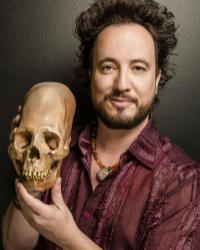 Giorgio is the host of Ancient Aliens, now in it's 9th season. He has worked closely with Erich von Daniken (the "founding father" of the Ancient Astronaut theory), he's been publishing the magazine Legendary Times since 1998, and is considered one of the leading experts in AA theory. He has traveled the globe exploring various historic sites, both with his various TV endeavors and in private expeditions.