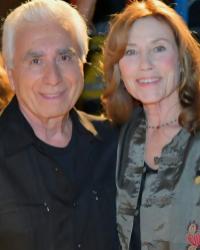 George and Sedena Cappannelli are award-winning authors, experts on individual, organizational and societal change, internationally known consultants and coaches who have worked with hundreds of the country’s leading organizations in both the private and public sectors and award-winning producers of film, television and theater.

They are Co–Authors of Do Not Go Quietly, A Guide To Living The Life You Were Born To Live For People Who Weren’t Born Yesterday, winner of nine national book awards, and The Best Is Yet To Be, How to Age Wisely and Fall In Love With Your Life Again; Getting Unstuck, Ten Simple Secrets To Embracing Change and Celebrating Life, Say Yes To Change; 25 Keys To Making Change Work For You and Authenticity, Simple Strategies For Greater Meaning and Purpose at Work and at Home.

They are Co-Founders of AgeNation, a company that offers education, engagement, inspiration and solutions “for people who weren’t born yesterday” and Empower New Mexico, a 501C3 that supports people and organizations serving vulnerable sections of our aging population.

They are the Co-Producers of The Ageless Living Television Series, a 40 Episode Series featuring 22 Award-Winning, Best-Selling Authors presenting inspiring, informative talks and empowering strategies on health & wellness, sustainability, relationships, financial abundance, science and spirituality, life and life after, and many more. The Ageless Living Series is Presented by NM PBS who is also distributing the series to PBS stations across and country and also distributed internationally, to foreign, US Streaming Networks and Educational Markets by Pop Twist Entertainment.

They have also co- hosted two regionally syndicated radio programs – AgeNation Radio Magazine and Conversations with the Wisdom Keepers. They have hosted global digital summits with leading authors and experts as well as live conferences under their Navigating Your Future banner in Santa Fe, Seattle, Denver, Los Angeles and other cities, and more recently, The Ageless Living Television Series for PBS. They have designed and helped to launch a new Age-Friendly City Model designed to build public/private sector collaborations to deal with the challenges and opportunities of the dawning demographic revolution. Their most recent consulting initiative with ABQ Together in Albuquerque resulted in George’s drafting of The ABQ Together Blueprint on The Future.

George also has extensive experience in the political sector having served as a campaign manager for Jerry Brown in his U.S. Senate Campaign in California in the early 90’s and as a special consultant to 3 presidential candidates. He also served as the Executive Director of the Sedona Institute, founding Director of the International Integrity Foundation and one of the Directors of the Society for The Advancement of Human Spirit, an organization chaired by The Dalai Lama. George is also an Emmy Award winning producer/director and an award winning sculptor.

Sedena has been a producer and actor in theater and television, acting in numerous films and episodic television programs including two seasons on Star Trek, The Next Generation. She incorporates 30 years of ancient and contemporary and energy practices as a LifeWellness Coach, empowering people to live beyond the limited constructs we’ve been taught about aging. As founder of About Life she offers her signature Enlivened Ageing programs, providing inspiring talks, programs and retreats to support participants to be empowered vital, and youthful at any age. Sedena is the creator of the Personal Energy Program, a personalized wellness DVD, streamed live on GaiamTV.

Together Sedena and George are committed to creating an age friendly society, revitalizing and invigorating life for the150 million Americans who will soon be 50 or older and assisting them to reignite their passion, fulfill their dreams and leave behind a legacy of greater promise and hope. George and Sedena also speak to younger generations, helping to build new bridges of understanding and collaboration across generations.

In the corporate arena, George has consulted to some of the leading organization in both the public sector and served as an executive coach to their leaders as well as teams at all levels of these organizations. Among the many clients he has had the privilege of serving are: NASA, The Boeing Company, The Los Angeles Times, NOAA, PepsiCo International, Sun Microsystems, Oracle, Leading Age, Accenture, Hughes Space and Communications, Loral, The US Navy, The US Post Office, The Department of Defense and many more.