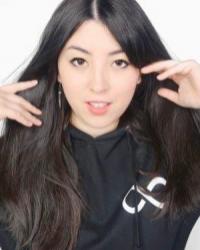 Currently based in the USA, Em was born in London, England to her Spanish mother and Chinese father.

A jack of many trades, Em worked successfully as an actress, with her most notable work in global cult classic ‘The Human Centipede 2’. Em also worked for a time as a Zoo Keeper, and also opened, nurtured and sold a prestigious London-based doggy day care.

She found her true calling when she began working as an animal educator, taking animals into schools, universities, museums and even prisons to give educational presentations, thus combining her passion for animals with her training as a performer.

An avid lover of travel and wildlife exploration, Em has filmed her adventures in countries such as China, Thailand, the Arctic and Africa.

Together, they donate their shows to USA Army Veterans, and children with special needs.

Emzotic continues to grow her audience and has an array of exciting, secret projects in the works to bring education and conservation through entertainment.