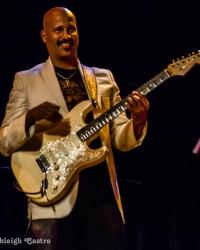 David Goodlett is an Oakland, California-based recording artist, songwriter, guitarist, label owner and educator. Founder of SIMBA SIMBI Music, his mission is to create a lifetime full of soulful, funky, transcendent, visionary music to serve as the soundtrack for people living the Pan African Revolution and the spiritually evolving, environmentally sustainable and economically just new historical epoch. SIMBA SIMBI is a Kikongo term from Central Africa which means “hold up that which holds you up”. He often reminds folks that, “art is the vision of the people, and without vision the people perish.”

As an educator David has taught pre-school, elementary school, middle school and high school in public, charter and private institution throughout the Bay Area. While he believes the education and empowerment of all children is vitally important, his special focus is combating the miseducation of African children wherever they live throughout the world. An avid student of Black history, African-centered spirituality and Pan Africanism, David is inspired by many great African educators including Asa Hilliard, Cheik Anta Diop, John Henrik Clarke, Anthony Browder, Carter G. Woodson, Marimba Ani, Booker T. Washington, Chancellor Williams, Ivan Van Sertima, Runoko Rashidi, Kaba Kamene, Wade Nobles, Amos Wilson and more who have made and continue to make it their life’s work to reveal the purposefully hidden truths about African achievement and potential, and posit the blueprints for the restoration of Africans and Africa to its traditional greatness.