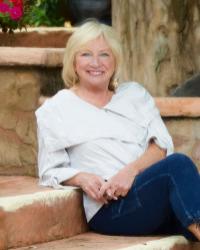 Danuta Pfeiffer is a progressive journalist, best known for her

work in radio and television in San Diego, and as her award-

winning memoir explains, her behind-the-scenes experience as co-host of The 700 Club with Pat Robertson during his run for

She has authored four nonfiction books, among them, Chiseled, A Memoir of Identity, Duplicity, and Divine Wine, which garnered

Experiences from Chiseled have been quoted by Pulitzer Prize-

winning author Chris Hedges in his book, American Fascists: The Christian Right and the War on America.

Her book, Watersafe Your Baby in One Week, was the first water

survival technique for infants endorsed by the American Red

TEDx speaker. She has written columns for the San Diego Union-Tribune, and her articles appeared in the Coronado Journal, Fair Magazine, and the Oregon Wine Press.

Award, the Gold Medal, and Runner Up to the 2021 Book of the

Year from the Historical Fiction Company, and a Five Star Gold

distance cyclist. Today, she enjoys making fine wine with her

husband Robin, as owner and manager of Pfeiffer Winery, a

boutique winery and vineyard cuddled in the Coast Range of

Currently, she is working on the second book in the