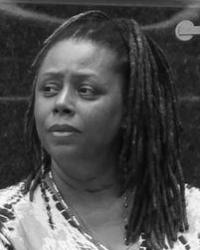 community-based workshop for residents of Brownsville, her childhood

neighborhood. As a result, she continues to serve as the director of the Power in the

As a native of the Brownsville section of Brooklyn, her life was greatly

control she witnessed in her neighborhood. At ten years of age, she participated in

As a result, fulfilling the charge “to give back” and be the teacher she and her

Stuyvesant, Brownsville and Crown Heights. Her work in education has been

Literate Lives by Dr. Maisha Wynn and a host of periodicals.

In 2001, Cathie published, Maurya’s Seed – Why Hope Lives Behind Project

Walls. She has just completed the 20 th year anniversary re-release. And after retiring

published, Mama Relly, her first children’s book series, which is illustrated by her

Lastly, she is currently completing, Miracle - the third book in her allegorical

Afro-futuristic trilogy. “First Flight” is an excerpt from Miracle.

African descent. She aligns all of her work with spirituality. Whether through her

messages and stories of hope and triumph.