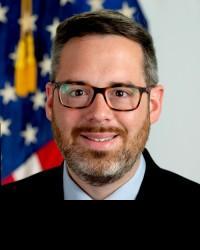 In May 2019, Calder Lynch was appointed Acting Deputy Administrator and Director of the Center for Medicaid & CHIP Services, where he serves as the agency’s senior executive overseeing the Medicaid and Children’s Health Insurance Programs, which cover some 72 million Americans. Calder began his career at the Centers for Medicare & Medicaid Services in May 2017, when he was named the Senior Counselor to the Administrator.

Prior to his federal service, he was the Nebraska state Medicaid director under Governor Pete Ricketts. In that capacity, he oversaw the division responsible for the state unit on aging and the provision of health coverage to nearly 240,000 Nebraskans. During his time in Nebraska, Calder led the development and implementation of the state’s integrated managed care program, Heritage Health.

Prior to his work in Nebraska, Calder served as the Chief of Staff to the Secretary of the Louisiana Department of Health and Hospitals. A Louisiana native, Calder earned his degree in Business Administration from Louisiana State University and his Masters in Health Administration (MSHA) from the University of Alabama-Birmingham (UAB).