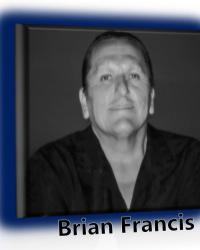 Author, Poet, Photographer, Director-Producer Brian J. Francis of Elsipogtog First Nation is an accomplished filmmaker. His major concern is the survival of the Mi’kmaq people and their culture. For many years, Brian managed the Juno award-winning aboriginal recording artists, Eagle Feather. He spearheaded the development and production of the APTN series, Eastern Tide and more recently, Wabanaagig. Brian won 5 international awards for the feature documentary, Circle of Justice, which screened at 17 film festivals around the world, debuted at the Smithsonian Institute, Bear Paw Productions aired on APTN, CBC and IFC. Brian then went on to direct The Sacred Sundance for National Film Board of Canada. Brian has produced, directed and has written over 70 documentaries. Most recently Brian released his first book; “Between Two Worlds- Spiritual Writings and Photographs". In addition, Brian is a community activist, a spiritual practitioner, a plant medicine knowledge keeper and a crab and lobster fisherman in the Northumberland Strait and the Bay of Fundy. In 2020, Brian was the recipient of the Lieutenant Governor’s Dialogue Award for his work has an ambassador for bringing people together and a protector and keeper for the Mi’kmaq language.